Coach of the Month

Coaching is about more than wins and losses. It is about making a positive impact on the game, the people and the community. NCR is proud of its over 400 coaches dedicated to improving the lives of young men and women playing college rugby across the United States.

The Penn Mutual Coach of the Month program recognizes coaches who exemplify the characteristics of a strong role model, build confidence and character in their players, devote time and energy towards building for the future, and make a profound impact in the lives of their athletes and the sport of rugby.

May 2020 Penn Mutual Coach of the Month

Congratulations to Darrin Barner, Head Coach of Wayne State College Men’s and Women’s Rugby Clubs on his selection as the Penn Mutual Coach of the month for May.

Looking at the wins and losses at the seasons end can paint a picture of a coaches understanding of strategy and structure.  What it does not always capture is the impact of the coach beyond the X’s and O’s, usually. In the case of Coach Barner the impressive trophy cabinet speaks to his technical ability to teach a high standard of play, but more so it is testimony to his capacity to reach and connect with student athletes who have often never played the game and generate a love for the game like few others can.

His players know his secret to success, they see the countless hours he commits to the team both during the season and off-season. They see him as a student of the game with a passion for lifelong learning who shares responsibilities based on trust with his captains. But more than anything his players see him not only as coach but a life changer. 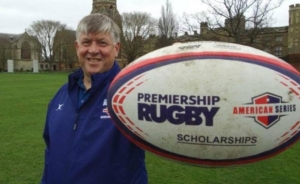 Congratulations to Kevin Phillipson, Head Coach of the Abilene Christian University Men’s Rugby Club on his selection as the Penn Mutual Coach of the month for April.

Very few coaches can call rugby their sole line of work and it is a special honor to be recognized for coaching while balancing life’s callings in work and personal life. So it is with Coach Phillipson who have been presented with many challenges off the field and yet has made such a significant impact upon his team. Even when those challenges has denied him the time to be with his team, he keeps them in mind and heart, preparing practice plans knowing that his team will execute those plans even in his absence such is the regard in which he is held.

Beyond the X’s and O’s and performance analytics of rugby, Coach Phillipson brings to his team a passion and love for the game. From introducing new players to the game to developing experienced players into select side caliber players, Coach Phillipson has earned the respect of his team.

“He has always kept his team first, even in the trenches of his personal life. He wants to make us is into not just phenomenal rugby players, but phenomenal men as well. He has been a huge role model to me and to others.”